BEYOND A STEEL SKY Print 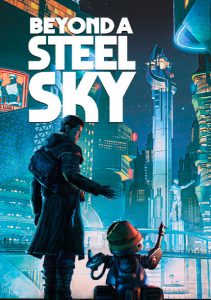 BEYOND A STEEL SKY

Subvert the world, hack the systems and solve dark conspiracies to uncover the devastating truth.

From Charles Cecil, creator of the Broken Sword series, with art direction by Dave Gibbons, legendary comic book artist behind ‘Watchmen’, comes ‘Beyond A Steel Sky’, the long awaited sequel to the cult classic ‘Beneath a Steel Sky’.

You are Robert Foster. A child has been abducted in a brutal attack. You have vowed to bring him home. The trail has led you to Union City, one of the last remaining mega-cities in a world ravaged by shattering wars, and political meltdown.

Union City is a utopia, its people loving life under the control of an altruistic AI: ever-attentive androids, designer living, piazzas and bars. What’s not to love? But this City has a dark underbelly…

‘Beyond a Steel Sky’ is a dramatic, humorous, cyberpunk thriller in which engaging puzzles drive a fast-paced narrative set in a dynamic gameworld that responds to – and is subverted by – the player’s actions.

The World
An adventure set within a dynamic world, populated by wilful characters driven by motivations that the player can subvert. In combination with a unique hacking tool, multiple solutions to puzzles emerge from player choices.

The puzzles
Intelligent puzzles are interwoven with an intriguing dramatic narrative to deliver a compelling gameplay experience.